By admin on April 23, 2013 in Imagining Natural Scotland Information Sessions 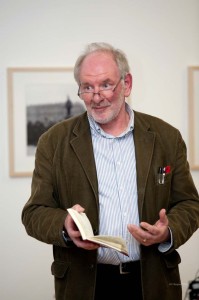 The Glasgow Information Session for Imagining Natural Scotland proved very popular and was attended by approximately fifty artists, scientists and professionals. Nick James from LUC gave a fascinating presentation on the work his company conducted for SNH projecting how Climate Change would effect Scotland’s landscapes. The conclusions they drew were that landscape change was inevitable, but there are choices and opportunities that we all need to make. While Nick suggested that landscape architects and planners should take a leading role in raising awareness of this change, he also concluded that much more work needed to be done to involve local communities to meet the environmental challenges and influence these landscape outcomes.

Following on from Nick’s talk poet Tom Pow gave a fascinating talk on landscape change from the perspective of rural people. Discussing the work he carried out a few years ago for his book ‘Europe’s Dying Villages’, Tom went on to discuss the problem of modern alienation from the natural world and the need to reconnect our senses, emotions and intellects if we are to meet tomorrow’s challenges. Following their talks there was a lively debate about the crucial role that land ownership – and land reform – would have in shaping our responses to climate change and the natural world. It was also suggested that Imagining Natural Scotland should also encompass re-Imagining Natural Scotland as a home for the nation’s future generations.

Following the break David Griffith spoke about the forthcoming deadline for project applications on April 29th and spoke about the need to concentrate on the arts/science partnerships and the big ideas for projects rather than becoming too bogged down in the detail. Since the project is about raising awareness about how representations of the natural world influence public opinion, he also suggested that part of the excitement would be to see the projects develop through the year rather than expecting them to come fully formed. Videos from the event will be posted on the website later this week.

Media from the Oban Information Session is now live
Thank you to all Imagining Natural Scotland Project Applicants!