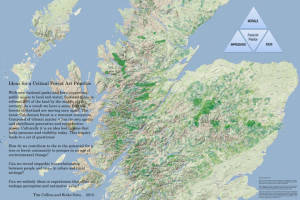 Text with a map showing the 35 remaining Caledonian Forest patches in Scotland.

Above is a sketch, an image created for an exhibition ‘Eden3: Trees Are the Language of Landscape‘, presented at the Tent Gallery in Art Space and Nature at Edinburgh College of Art, University of Edinburgh in May 2013. It sets the threshold for the work that began in July 2013.

In 2012 we had chosen the Caledonian forests of Scotland as a topic of research and creative inquiry. We began to read what we could find and planned trips every six weeks or so to visit sites all over Scotland.  We had begun to collect image and ideas, cataloguing and mapping experiences and would push ideas around as we traveled. We began with a quest to identify extraordinary living things, and to consider empathy as a means of engaging a forest. We used a mix of new and old technology, engaged a lot of science and began to think about the philosophies that might be most useful as a means of shaping our process and method.

In May 2013 just before the application to ‘Imagining Natural Scotland’ was made we had begun to think seriously about the Rannoch/Glen Lyon region; where remnant plots of historic forest are being extended through careful regeneration, replanting and now through landscape scale restoration plans. By July/August 2013 initial work in the Forestry Commission library revealed the fact that the Black Wood of Rannoch is largest and the most ecologically significant Caledonian forest in the southern Highlands. It is a site of incredible ecological sensitivity, with a range of biodiversity. By August we began to understand that the Black Wood has is not engaged as a site of cultural import. The Tay Valley District Forestry Commission has long embraced  scientific culture as a means of protecting the Black Wood of Rannoch from other interests, with good effect. In 1973 it was arranged to give it status as a forest reserve was a creative means (by visionaries within the Forestry Commission) of protecting the forest from the Forestry Commission itself!

The question that we are struggling with is what can artists contribute to a place that has a culturally important, and significant ecological aesthetic? We did not want to make art in the forest. We want to find some way to work with, or contribute to the forest as a living thing. We are looking for an effective ethical aesthetic relationship in this work. The first step was to clarify what a critical forest practice might be.

With new national parks and laws supporting public access to land and water, Scotland plans to reforest 25% of the land by the middle of the Century. As a result we have a sense that the forests of Scotland are moving once again. The iconic Caledonian forest is a remnant ecosystem. Composed of vibrant living matter it has its own agency and significant generative and reproductive power. Culturally it is an idea lost in time that lacks presence and visibility today. This inquiry leads to a set of questions:

How do we contribute to the to the potential for a tree or forest community to prosper in an age of environmental change?

Can we reveal empathic interrelationship between people and trees in urban and rural settings?

Can we work with others to embody ideas or experiences that effect or reshape the perception and normative value of extraordinary living things.