By admin on December 1, 2013 in Uncategorized

The Primary 6/7 class of Port Ellen Primary School listened carefully last week as I galloped through time explaining, as best I could, how the myth of the Barnacle Goose began, developed and was perpetuated. Using a presentation of pictures and quotes from history, we started with a look at how geese had been viewed through time in Scotland. In medieval times, sea monsters and dragons were commonly believed in, and tales of strange creatures formed part of oral history with very few written down. The Barnacle Geese migrated north every summer but this was not understood, and since no nests were found, a myth grew to explain the unexplained.

The children viewed copies of rare illuminated manuscripts, written and drawn by hand – probably using goose feather quills – and considered the curious drawings of strange trees out of which according to the myth, the Barnacle Goose originated. They could see that the drawings were not very realistic. Clearly these artists had not seen the ‘Goose Barnacles’, or pendunculata, which were the supposed source of the geese; a shellfish still washed up on Scottish shores stuck to old timber. This ‘barnacle’ has a neck of rubbery dark brown and several creamy white shell-like plates covering feathery brown mouth parts. The medieval artists often illustrated this structure as a very decorative tree with strange fruit or pods, out of which popped new geese. The myth persisted until the 14th century and beyond, perhaps because of the handy belief that the Barnacle Goose was NOT meat, but considered shellfish. This meant that it could be eaten on Fridays and during lent when ordinary meat and fowl could not. In the late Middle Ages, the pendunculata was dissected and drawn accurately but still its parts convinced learned men of the belief that geese sprang from it, into the sea fully formed. Doubt crept in when Dutch sailors found nests in the arctic and very gradually word spread that the myth had a more rational explanation.

The twenty two children at the school on the Isle of Islay had debated whether there was too many geese on the island. Currently, many in the farming and crofting community are struggling to farm in the way they want to because of large numbers of Barnacle Geese. There were children with very different views of the geese in the class, possibly reflecting some of their parents’ views. During the following art workshop activity, each pupil was encouraged to write words or phrases to describe their views and impressions of the geese. Selecting one of these ideas, they were challenged to express it through monoprinting. The resulting artwork was very colourful and expressed diverse views with pieces of text including: 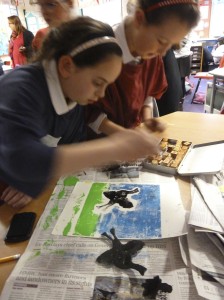 Before my school visit I met with Gill Johnstone at the local NFU branch and she kindly explained the situation for herself and many farmers who are not happy about the increase in numbers of these geese. She acknowledged that the birds are attractive and belong here on Islay but that there are now too many. She gave me photos of fields trampled into muddy puddles after the flock had eaten all the spring grass and moved on. She also showed me a graph she had made indicating that Barnacle numbers are increasing and likely to increase dramatically over the next 20 years.

“We have no freedom to farm because of the geese”, she added. Islay is known for the all-year round growth of grass which must taste like “the best chocolate on earth” to the geese which is why the geese love it so.”

“Spring is make or break time when the farmers need good grass,” for stock who have been housed during the winter and the silage making, to provide fodder through the winter. But Gill told me the Barnacle Geese are staying later each year, now into May until they disappear off to Greenland with Islay grass in their bellies.

After my meeting with Gill, I went to see Scottish Natural Heritage’s Rae Mackenzie, who is busy writing a ten year management plan for the geese in consultation with all parties involved in what is a contentious subject on the island. She told me that innovation is needed to meet international conservation objectives, minimise economic losses for farmers and give value for money for the Scottish taxpayers. Barnacle Geese are counted several times a year on Islay and Rae said that the growth in numbers has actually slowed in the last 5 years but there are not enough data to be able to predict future numbers accurately. Around 2,000 Barnacle Geese were shot last winter with special permission on Islay but are not allowed to be sold for meat. Bright coloured streamers and humming tape or string are being tested to scare geese off certain areas. However, the clever geese are moving about and feeding at night to avoid these tactics. Rae’s new management plan will be ready in 2-3 years time and will possibly allow further controlled shooting as well as clever scaring and barrier techniques but a gradual reduction in numbers to a sustainable level is likely. 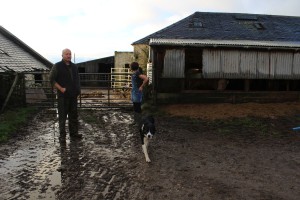 The following day of my brief visit to Islay, I met Alan Clark who farms near Port Charlotte who told me what it was like to farm next to the geese. Farming has changed because of the geese he explained.

“I try to plan things for the sheep, but I turn round and the grass is all gone”. The Barnacles “don’t just eat the grass but kill it,” to the point where it is not worth reseeding.

“I had to feel quite annoyed before I could shoot them,” he said, explaining that he used to shoot them with a legal permit. “Barnacle is tasty wrapped in bacon but if they have been on the saltmarsh they taste a bit salty.” As with many affected farmers he accepted a cheque from the government based on the numbers counted on his land, and so has not scared them this season. The amount is some compensation but does not cover the losses incurred unfortunately, he explains. “There are geese in lambing fields now but there never used to be,” as the geese are staying later in the spring before returning to Greenland.

James How over at the RSPB reserve and farm at Loch Gruinart is involved in running a  farm alongside the geese. He proudly showed me some of their prize cows, clipped and ready for showing as well as the flocks of many black and white bodies pecking away rapidly at the grass on the Flats. He explained that in late October there is a large number of Barnacles on Islay and the quantity goes down by several thousand as the flocks disperse to other places around the Western Isles and West Ireland. The 2013 counts are down on last years figures at this busiest time. They use the Isle of Islay as a hub. The geese attract many birdwatching tourists during the winter, who help to bring in an income for the hotel and restaurant trade during the quieter season. Visitors come to Islay for whisky and wildlife, of which the Barnacle Geese winter population is one of the greatest spectacles.

My husband and scientific partner in this project has been studying Barnacle Geese for the last 30 years and his colleagues before him since the 1940s. They see the conservation of the species as a success story and hold a fascination for their long migration and the social dynamics of the species who flock to avoid predators. Migratory geese are one of Scotland’s great natural spectacles. My husband sees a role for careful management of geese numbers when a sustainable level has been reached, with monitoring, to make sure there are no drastic reductions, and compensation paid to farmers who farm sensitively with geese in mind. 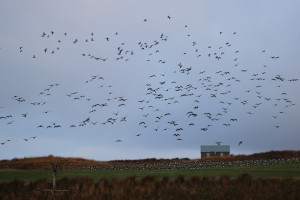 Just like the children I worked with, nearly everyone I met on the island expressed an appreciation of the geese, the dramatic plumage and the impressive way the flocks take off and whirl about with a cacophony of sound. They are a signal that winter is here and the cycle of the seasons will continue, which is a reassuring sign for some. Yet their appearance in currently large numbers is seen as a nuisance by others and even a threat. I have a sketchbook full of images, impressions and thoughts about this iconic bird, from which my artwork will develop, based on conversations I have had with the human community who share the same space.